I am grateful for my family and my friends,

I am grateful for my Junior black belt and how far I made it in Karate,

I am grateful for my school,

I am grateful for my teachers and Basketball. 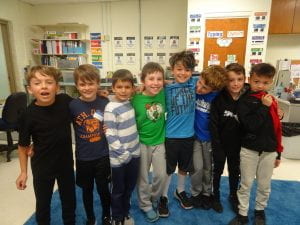 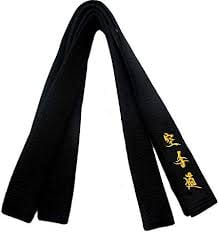 We were in the car and when we got close to our destination I realized that we were going to the beach since we saw beach houses.  I remembered that they were beach houses because one of the special memories that I had with my Dad I wrote about in second grade and I drew the picture of the beach house. My little brother screamed “The beach? The beach! Huhhhhhhh!”

When we got to the beach parking lot I asked, “What are we doing here?”  Mom said, “To take a walk.” We got out of the car. Mom left the water bottles in the car. We started to walk towards Bass Beach not the beach we go to. 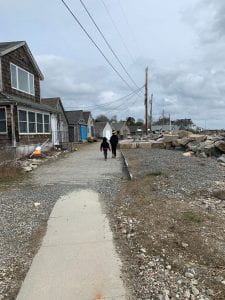 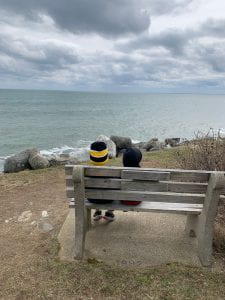 When we walked I decided to find special rocks for souvenirs. I decided to take a picture on the first bench that I saw and I waved at truck and the truck waved back, honked, and smiled back at me. After seeing the truck, I found my first rock. It was very thin and it was really smooth. It was special because the truck hit the rock at the bench that I was sitting on to remind me of what happened. 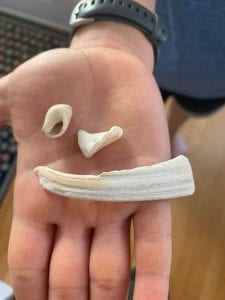 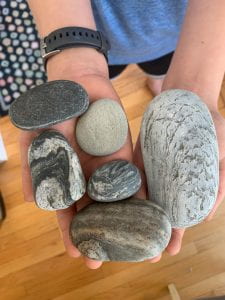 My Mom saw surfers at Bass Beach and thought they were ducks.  They were like two miles away from us. Then I saw two actual ducks and I thought that the surfers were too big to be ducks. Then I saw a rock that looked like it was from Mars. My brother was really disappointed that he did not see any rocks that looked like it was from Mars. Then we walked across a really long rock pile. My Mom said it used to be higher and longer until the Nor’easter of 2019 caused damage along the ocean.  I saw a white house and kept saying “hey Jacob it’s The White House!” 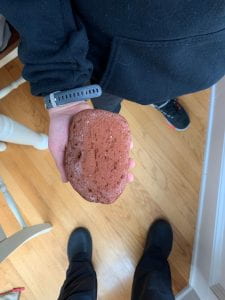 We tried to take a picture to put on the background of my computer with the waves crashing behind us but it did not work many times. 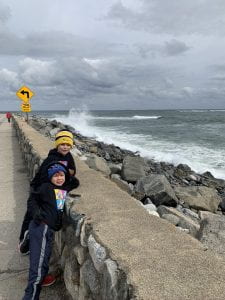 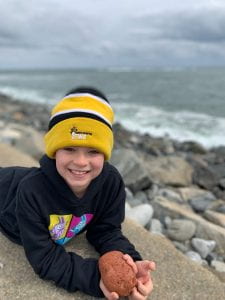 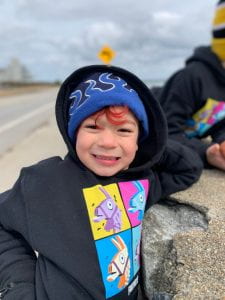 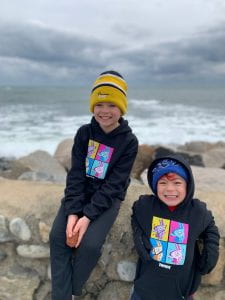 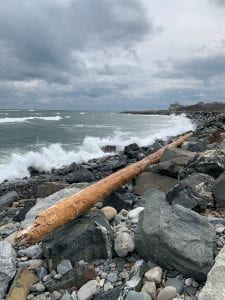 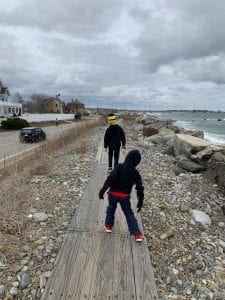 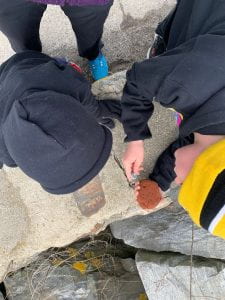 When we got to the grey house I saw that the name was Tower House.  We walked to where the sidewalk ends.  I remembered the book Where the Sidewalk Ends. We saw a note made out of rocks.  It said “BE WELL.” We made a heart made out of rocks. Inside the heart we put four rocks for Mom, Dad, Jacob, and me. On the way out we stopped and made some cairns. On our way back I asked “How many houses did we walk by?” We had a discussion on how the numbers changed with the town lines. Every time we saw people we stayed 6 feet apart, aka social distancing. Jacob and I made up words for the Adams Family song.  We annoyed my Mom by singing the Jeopardy theme song over and over and over and over, etc. 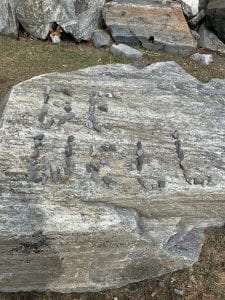 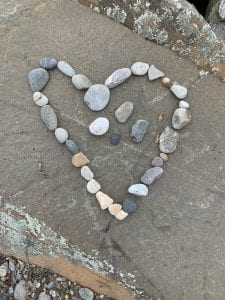 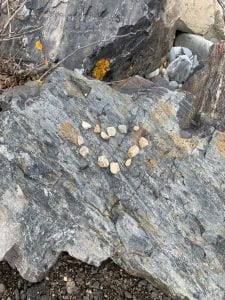 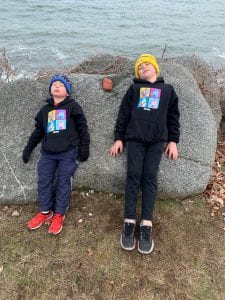 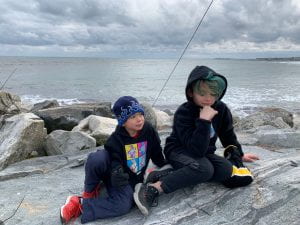 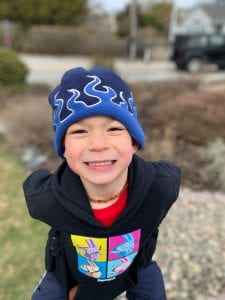 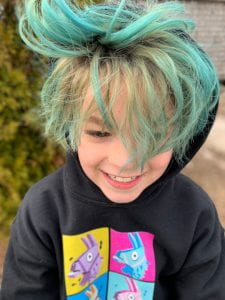 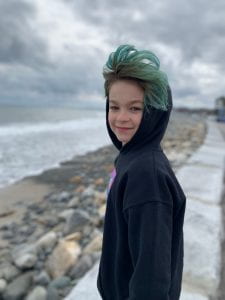 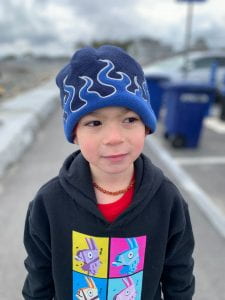 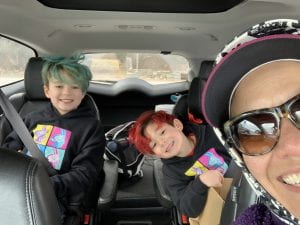 I learned that a good support helps keep stuff stuck to the ground.  I used a sticker to hold the house down so that the wind didn’t blow it away.  I even tried blowing on it and it stayed.  I also learned that there is a special glue that keeps the roof from blowing off a house.  I used stickers to keep the roof from blowing off.  I would have ripped the stickers in half but it was too hard, so I used other stickers too. 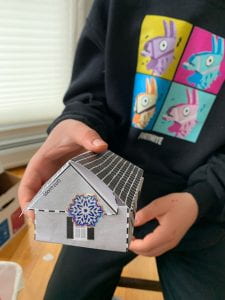 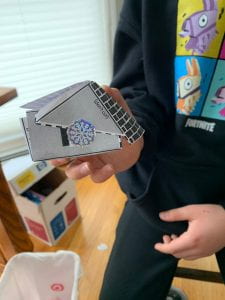 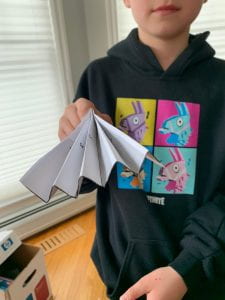 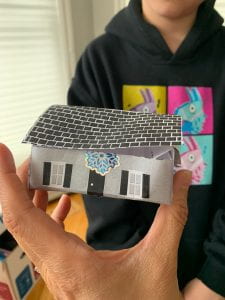 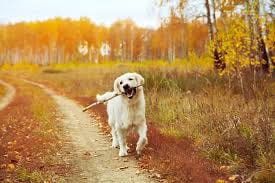 Watching the  birds come back,

Going swimming in the pool when it’s cleaned and open,

Picking the cherries of are cherry tree,

Winter is fun, but Spring is fin too.

In Karate I am a Junior Black belt. Three Years ago in September I started to do Karate at Randall School of Karate in Exeter at 75 Portsmouth Avenue. In January (That’s when I tested for it.) I went to my  Sensei’s dojo that’s in Atkinson, New Hampshire. I was scared that I would not pass the black belt test. When I got in the dojo, I looked for my friends Tyler, Allison and Caleb. I saw Tyler and Allison but they were in the older group because they were in 5th grade and I was in 3rd grade. Then Caleb walked in behind me and surprised me so badly that I almost screamed.  When we got into our zone for the test I was not that scared. When we were all done I was super happy because I passed the test.